How to choose the right truck for an RV? 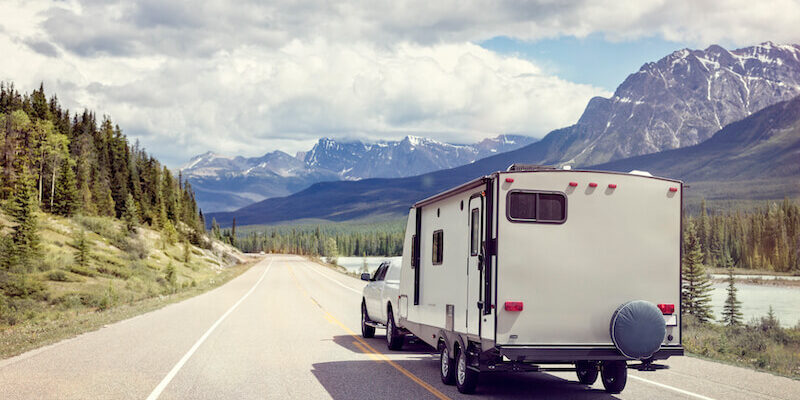 Do you need to choose the right pickup truck for a truck and camper? There are lots of truck brands, engine options, classes, vehicle configurations and more. Let’s get into it!

Let’s take a look at the makes and models of trucks that are suitable for truck and camper combinations. This information is based on what is available in North America (USA and Canada) and may not reflect what is typically available in other parts of the world.

Currently, there are six car brands with trucks recommended and approved by manufacturers for truck campers: 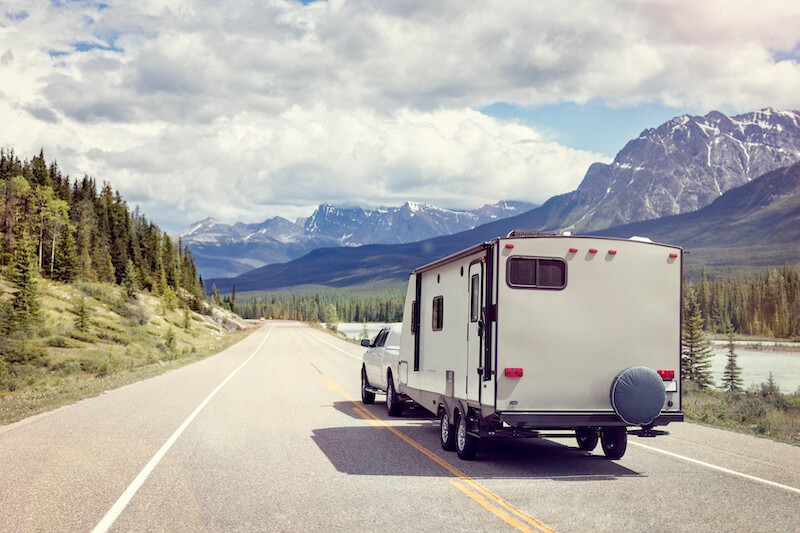 When it comes to hauling an RV, nothing is more important than the rated payload of the truck.

A truck’s payload is simply the amount of weight the truck can carry, and it is a product of the truck’s gross vehicle weight rating (GVWR).

The payload, expressed in both pounds and kilograms, can be listed on a sticker on the driver’s door pillar or in the glove box on the payload certification form. You can also determine the payload by subtracting the curb weight of your truck (you will need to take it to the scale to get this figure) from the truck’s GVWR.

Essentially, everything carried in your truck, including all passengers, gear, and your “wet” fully loaded camper, must be below your truck’s rated payload.

Significantly exceeding your payload and gross vehicle weight rating is not safe for your passengers or others traveling with you on the road.

Gross Axle Weight Rating (GAWR) is another important estimate when it comes to your truck. 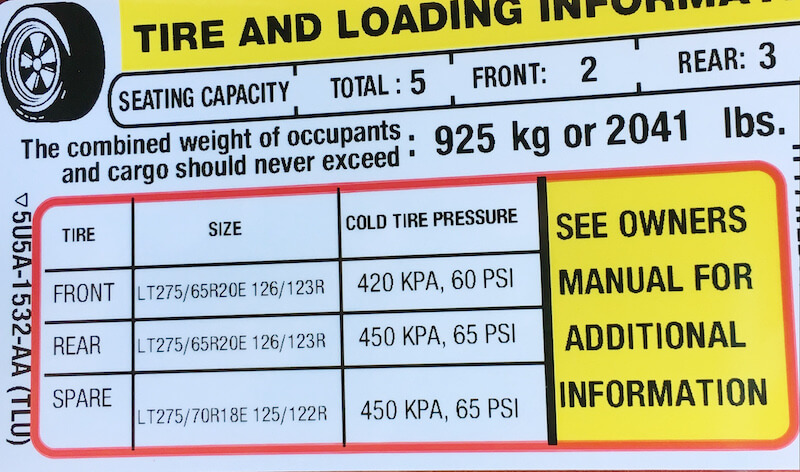 Each axle is assigned a GAWR, but the most important one is the rear axle because it will carry most of the weight of your load. You can find these ratings by looking at your truck’s axle and tire ratings sticker or by reviewing your truck’s payload certification form.

If you look closely at these ratings, you will see an increase in GVWR when you add them up. This increase can range from 100 to 500 pounds per axle.

Exceeding a truck’s rated payload capacity is not recommended, but these ratings can be used to squeeze out extra pounds of payload. You should never exceed the GAWR of your axles, period.

The most common question in choosing a truck is whether to buy a truck with dual rear wheels (DRW) or with a single rear wheel (SRW). Each has its pros and cons.

Dually offer superior stability and handling on pavement and usually offer a much higher payload, but they are also wider at the “hips” and less suitable for off-roading. It’s true that DRWs “float” better on certain surfaces, such as loose sand, but their big disadvantage is that jagged rocks can get stuck between the rear wheels, causing abrasions and other damage.

SRW dump trucks are narrower, lighter, more versatile and offer excellent traction and maneuverability on all types of road surfaces. Essentially, where you’re going to take your truck camper plays a big role in what type of rear end to choose.

The proportion between diesel and gas engines among truck owners is usually about 60/40 with the diesel advantage. In general, lighter convertible and hard-sided campers prefer gasoline trucks, while heavier hard-sided and slide-out campers prefer diesel trucks.

This is really a generalization, as many owners of large hard-sided campers prefer gasoline engines and many owners of retractable campers like their diesels.

With the high cost of diesel fuel and today’s stringent EPA standards, you’d think diesel would be dead in today’s car and light truck market, but that hasn’t happened.

Diesels still provide superior torque, better fuel economy and last longer than the typical gasoline engine (600,000 miles is not uncommon). They also retain their value better and have an associated “coolness” factor that a gas engine cannot touch. The new Diesel Exhaust Fluid (DEF) requirements place an additional burden on diesel owners, but there’s also no denying that a modern diesel engine burns cleaner, runs much quieter and has no odor associated with it. that they had in the past.

A small disadvantage is the loss of payload associated with a heavier engine, so this needs to be carefully weighed against the positives and your specific needs. Because of this, we wouldn’t recommend a diesel for a truck under a ton.

Modern gas engines may not match modern diesel engines in power, torque, or fuel economy, but they’ve come a long way. Unless you’re towing a heavier camper, towing or requiring the aforementioned blasts on hillsides, a modern gas engine will probably offer everything you need.

Unlike diesel engines, gas engines are much cheaper, cheaper to maintain, require no DEF, and run on cheaper fuel available at any gas station from coast to coast. Gasoline engines and transmissions are also much lighter, often adding hundreds of pounds to a truck’s available payload.

If you are considering an electric truck, we can’t recommend such trucks yet because they have not been tested and there is not enough data on them right now.

Can a modern half-ton pickup truck haul a camper?

It depends on the truck, its rated payload, and the size and weight of the camper you have in mind. For example, a 2015 Ford F-150 with a short platform (154-inch wheelbase), crew cab, all-wheel drive, and heavy-duty package has a rated payload of 2,799 pounds.

That’s a pretty impressive figure even for a 3/4-ton truck with a gasoline engine. Most half-ton pickups have much smaller payloads, usually around 1,600 pounds. This reduced payload basically limits you to retractable truck campers and small hard-slip campers like the Lance 650 and cab-less models like the Northstar Vista. With the exception of the aforementioned Ford F-150, most of the half-ton will require an upgrade in shock absorbers, spring packages, brakes and tires, the latter meaning improved capacity from the weak passenger tires that came with your truck to a set. light truck (LT) tires with load range D or E.

There are pull-out campers for long platform trucks and hard-sided campers for standard short beds (a good number, actually), but the facts remain.

There are other reasons why you might consider a short platform camping truck.

For each of these examples, we really thought about friends at truck camp and their short-bed campers.

Most camper owners have a preference for extended cab or Crew Cab trucks. In turn, most campers are designed for pickup trucks with extended cabs and/or Crew Cabs.

Extended Cab and Crew Cab configurations not only have room for rear-seat passengers, but also room for pets, gear and toys. In our Crew Cab truck, we use the rear seat area for many items that would otherwise have to be left at home or take up space in our camper; boxes of supplies, two camping chairs, Angela’s folding bike, and more.

When a camper with an extended (north-south) cabless system is mounted on a truck with a standard cab, the cabless vehicle can block traffic lights and road signs from the driver’s view.

The owner can stop well before an intersection to see the traffic lights, but this is not always possible or safe. For this reason, campers with extended cabs are not recommended for trucks with standard cabs.

How many wheels a truck has?

The choice between trucks with one or two rear wheels is only relevant for trucks with a payload of 1 ton or more. Trucks under one ton are not available with dual rear wheels.

This works well because trucks in the less than one-ton class are better suited for lightweight pop-up and rigid side-by-side campers. Retractable and lighter rigid-frame truck campers tend to be designed for more adventurous off-road and off-grid travel and camping. Accessing these features often requires crossing narrow trails that can hinder the width of two-wheeled trucks.

The “single rear wheel” or “dual” solution is most relevant for single-toned long trucks. There are several short bed options; most notably Ford (discontinued in 2008) and Ram’s Mega Cab. These short trucks with two rear wheels are relatively rare and will probably require careful measurement, coordination, and installation.

If you’re looking at a one-ton long platform truck, the choice between a single rear wheel and a dual rear wheel comes down to the fully loaded wet weight camper you have in mind.

In this article, we looked at the basic characteristics when choosing a truck for an RV. We hope this article helps you in your choice.

Danny Hubbard has extensive experience in the car service, at the moment is the author of articles in specialized publications on transport and car repair.

We are the TheTrucks team. We created this site so you can find the best products for your truck. Read more on our about us page.